Peance means to refrain from, renunciation, to pay the price, to face the consequences of one's actions, of one's karma. 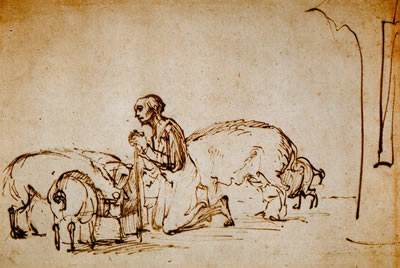 The lost son eating food of the pigs<Br>Rembrandt van Rijn.

Penance is a fundamental value associated with the regulative principle of sharing honestly and not gambling. There are two options: voluntary penance and imposed penance. Voluntary penance implies that one restricts oneself on one's own accord. Imposed penance means that one waits until fate according one's accumulated karma deals a blow with a certain reaction to one's actions in the form of a kind of penalty or punishment, a disease or another unwanted limitation imposed from outside. When one e.g. refuses to refrain from eating too much, must one face the penance imposing itself in the form of a disease like obesity. Making too much money, must one pay for it in the form of taxes. And when one with an axcess of money starts to gamble or speculate, is one promoting the greed which leads to conflicts and will happen to the detriment of good causes. When one does not respect the day of the Lord one gets overworked. When we don't want to pay taxes, will there be more and more crime from the side of also righteous people unable to obtain by legal means what they are entitled to according the bill of human rights. The consequence will be civil war to some degree in the sense of a rise of what one could call: 'unwanted free enterprising'. This is the way penance coheres with sharing honestly together, living in peace and security, being and staying healthy and having respect for the human rights.

Who renounces and how?

Apart form being common sense, is the conscious practice of penance an inextricable part of most of the religious value systems. Godlessness is associated with a lack of renunciation. The filognostic is with his dharma of voluntary penance in the form of fasts and other regular acts of penance and disciplinary measures, and thus protects he himself and others against a lot of misery. There is also mention of paying voluntary taxes in the form of donations and gifts for good causes. The materialist enjoys untill he gets sick of it or until a conflict rises with others. 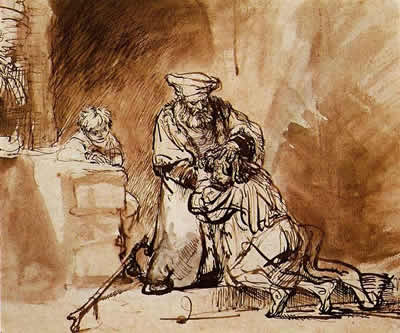 So penance means that one doesn't take or eat more than one needs. In a society in which the principle of voluntary penance is not known or has been given up will godlessness rise with the therewith associated forms of psychiatry, addiction, cultism and the more or less organized forms of crime. For the sake of a peaceful, just society thus is collective penance something essential. And this is also true for making money: in principle suffices voluntarism, working for not more than a social security check, some household money or pocket money. Based on that, or else upon the basis of a reasonable system of extra rewards in the form of wages conceived in levels with a clearcut top range, can a society be manageable at a basic level. Without these voluntary limitations will there be collective and individual economic crises because of inflation following a 'more-is-better'-philosophy or else because of the conversion of the extra value of labor into passive capital which as a false security being kept away is no longer part of the economic process of exchange. The principle of penance also resorts under the command of not stealing: according the vedic tradition is one a thief when one aquires more that one needs or when one eats more than one needs. The vow of yoga means e.g that one doesn't steal and that one is free from collecting material goods. Islam e.g forbids the imposition of interest with loans as a measure to ensure the renunciation, the value of the money and the humanity. In christian monasteries is the vow of poverty defended: one consciously opposes the striving for riches in order to clear the path to heaven. For the rich man is to attain the true and lasting happiness of the spiritual heaven of the righteous and repentant something more difficult than it is "for a camel to pass through the eye of a needle'".

If you place a ceiling on your desires, you will be happy. He who has many desires is the poorest man.
The man with contentment is the richest man. Guna, virtue is more important than ana, coin.
(Bhagavân S'rî Sathya Sai Baba in the Satyopanishad)

Practice placing a ceiling on desires - consciously and continuously strive to eliminate
the tendency to waste time, money, food and energy
and utilize the savings for service to mankind.
(Bhagavân S'rî Sathya Sai Baba's Nine Point Code of Conduct)