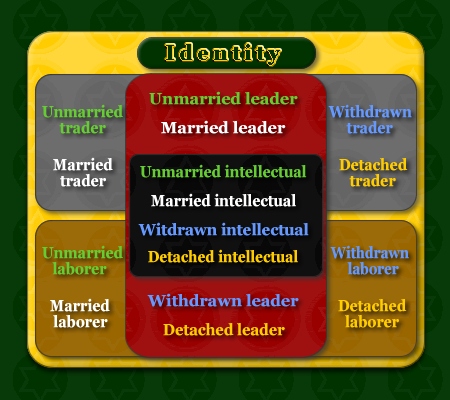 Personal friendship may transcend all classes and age groups. That is its power and virtue. The purpose of the Game of Order is to be first of all good friends with like-minded people. To be like-minded may exist independent of one's profession and age, level and experience. Thus is one in the position of helping and supporting each other in the game of life. Friendship as well may be independent of religious or political preferences or of profit minded motives. At the personal level is friendship a lofty ideal of being equal in self-realization and emancipation in which one accepts one another the way one is. But there is also a downside to this in the sense of being nepotistic: to practice favoritism with friends and family members in societal interests and thus be discriminating and slighting others. Also elitarism, the selfhood of an elite, can be the consequence of this. Friendship as such can also be a conspiracy about a certain weakness. Gambling, sex, and drugs make no real friends when the kicks are over and friends in crime also betray one another once the hit is made. The ulterior motive spoils one's friendship easily. Friendship may thus be an illusion. Pure friendship without the attachment of an ulterior motive is what one is looking for in life.

Friendship or comradeship in a formal sense belongs to the four societal classes which in the game are called the vocations or professional orientations. To be of friendship, to be a friend means that one belongs to a recognized group of identities, an aknowledged calling in life within the Game of Order. Thus are also the spouse, the children and other types of people included in the game. Formally is friendship divided in:

The notion of friendship in a formal, societal sense concerns the class of laborers, the employees, the workers. The idea is that all labor takes place on a basis of comradeship, an ideal the socialist likes to run off with. We are all friends in labor, each must make a contribution, pull his weight in society. Irrespective the labor we perform, salaried or voluntary, are we in our delivering service all equal brothers with equal rights and must consequently also act like brothers and sisters; we as friends and comrades are societally obliged. We are in the first place all of service to God for that matter. Only if the notion of God, considered personal or impersonal, comes first can we be equal. With serving lesser gods will one run into the conflict of material interests because the lesser god represents a partial interest. Most religions, the traditions which shape our future concomitantly, agree about this. In filognosy is the form of God, He who in fact is the saintly of the unseen integrity and spirit in the beyond, pragmatically assigned to the order of time. We do with whatever society on the planet it may concern depend on agreements of time settled by clockwork and calendar. To agree about a certain order of time is a prerequisite for human civilization. That is the form of God we actually share as humanity, wherever we are. What matters is to be pure in this, that is to say, to get as close to the original, natural and eternal truth of time as possible. This was also an original theme of the French Revolution: to reform the time in such a manner that nature would rule again coming first and thus equality, fraternity and brotherhood would be attained. Because that revolution of time failed and an everlasting quarrel ensued in the democracy, are we still to realize that revolution of time reform with the filognosy and thus purify the democracy of the dividedness which is based upon humanity's being estranged in respect of nature. Practically this means that filognostically one is bound to a reform of the time-system which ampunts to replacing the linear week and the mean day with a week that is leaped and a lunar phase at the one hand, and the once a week aligning with the sun of the standard time clock at the other hand (see also tempometer and cakra-order). The ultimate integrity of the person of God in which we find durability, happiness and consciousness, is found in the integrity of one's being of service to the six views of filognosy which are set as the goal while we as the means thereto make use of the opulences of God that are founded on the three fundamental truths of the natural reality: the time, the space (or the force field of the ether), and matter. This way it become clear that, next to a time reform for the sake of the natural, cyclic nature of time, filognosy also entails an acknowledging of the ether as being the force or the force-field of God, as well as the acknowledging of the material creation as being the form of the living God who so easily bewilders us when we are not that clear about the time and the ether.